What a roller coster of a first competition on this trip for Coach Justin!

The first week of the Euro Trip where Coach Justin is competing at two Sanctioned events is over, and I finally got some time between the crazy adventures to give you a little breakdown of how the first competition went.

Our goals for Justin's first Individual Sanctioned event were simple: Gain experience & perform as close as possible to 100% and then let the placing fall as it will.
In a competition with more than 1000 athletes (+300 in the Male Individual division) we expected short explosive WOD's and even though Justin is too good to have "weaknesses" we knew that this is still an area we are fine tuning - cool thing is that you'll see how much progress we made with this type of WOD's as the weekend went on!

To get the field down to a manageable size the first day was run as a qualifier where the top 100 were to move on to the "Finals" (Day 2 & 3) and the athletes basically had 3 scoring opportunities in 3x3min AMRAP's with 1min rest between them The ranking in each would determine their end ranking in the Qualifiers.
We had no doubt that Justin would qualify for the Finals and after doing the Qualifier WOD's a couple of times in training we knew his scores would be competitive even at half speed, but we decided that we wanted the high intensity mindset going into the rest of the weekend from pushing pretty hard so we went for a "90-95% effort"-approach in all of them.

Justin stuck to plan and got off Ski Erg at about 55s and then went with a big set of 20 reps in the beginning. He chipped away to a total of 56 reps. Good enough for 16th in that WOD. 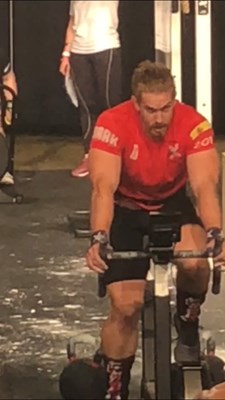 We'd been playing around with breaking Deadlifts in 2 sets in training to see if it saved from accumulated fatigue, but decided against it as Justin wanted more time to go hard on the bike. Turned out to be a good decision as Justin managed 1361m = 21st in that WOD.

This was the only one we didn't get what we wanted out of the Qualifier WOD's where a couple of days with a bug before this day possibly set Justin's energy levels a bit lower than we wanted, he still managed 19 reps (aiming for 22-25) which was good enough for a 21st spot in the WOD as well.

Total placing after the Qualifiers: 11th

The Qualifiers raised our confidence going in to the main event and we had set a target before the weekend to fight for a top 10 spot, which felt very doable going into Day 2. 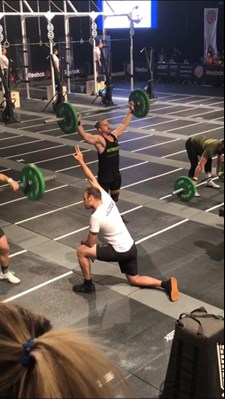 To be fair we had trained this with the understanding that the first 6-9-12 AND the Ski Erg was the first scoring opportunity, but when we on the day found out that the time for the 1000m Ski Erg ALONE was the first scoring opportunity we had to make a change in strategy.
Out of all the machines we use in CrossFit the Ski Erg is arguably Justin's weakest so we chose to rather make a strategic break in the round of 12 Snatches and also 12 Pull Ups to save energy for it. It kind of worked as Justin's 3'45min on the Ski Erg was 7s faster than in training, but it was still a low placing (32nd) and obviously cost a bit of time for the total time.
Justin fell behind on the Ski Erg but did an AMAZING job pushing full send from there on and passed a lot of athletes going unbroken in the Wall Balls & Sumo Deadlift High Pulls - and with a dive finish just within the time cap (8:59min) he ended in 20th spot in that WOD! 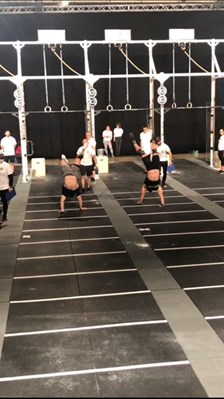 Fun fact: for WOD 1-3 Justin was next to his old "arch enemy" and friend Jonas Mueller (Switzerland) who he's been competing with at Regionals before - they are usually very close in capacity.

To be honest this was the biggest disappointment of the weekend. We expected Justin to crush this one and hang with the absolute top, as an example he was second at Regionals in Madrid last year in a very similar WOD and his capacity in HSW & Muscle Ups is world class, but it didn't go his way here.
Unfortunately we got a bit unlucky with Justin's rings being set uneven (you could see Justin swinging sideways a lot in the live video), but those things happen to everyone and what we are really happy about is how Justin didn't give up due to it and really did a huge job staying in the game and fighting to the very end.
I actually made Justin do the WOD in training with a fat bar and he was about 30-40s faster to the shoulder to over head then - today Justin managed 4 reps on the last station which was definitely less than we wanted.

For obvious reasons Justin was a bit despondent after Day 2, we had higher expectations (rightfully so) and it's never easy to not perform as you want to. However, we also knew that without making any excuses at all that some of the variables for the less than desired performances were out of our hands and my goal for the night before the last day was to turn Justin's mind around to be able to attack Day 3 with full force.
Justin is an incredibly strong minded athlete so after a dinner were we spent a few hours talking about the big "why's" and how much more we knew he had in him Justin quickly shook day 2 off his shoulders and came back as a new athlete for Day 3! 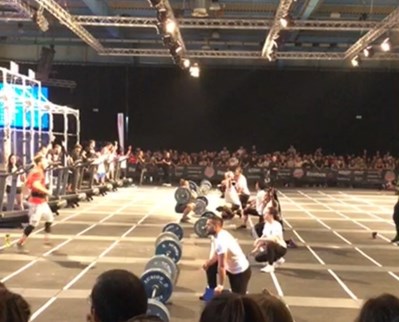 This is a WOD we actually did twice in training after it was released and we knew Justin was going to be strong in both movements. In training we first did it with quick singles at 110kg and Justin finished around 4'40min, and then I made him do it one more time with 5kg more on the bar (115kg) and he still finished it faster then at 4'30-ish.

After watching a few heats I decided to see if I could challenge Justin's usual "we do what we've done in training"-menality with asking him to go Touch and Go on the cleans AND keep a slightly higher pace on the runner still - cool thing with Justin is that he doesn't back down from challenges so he agreed to give it a go!
Full on attack from first second and hold on for as long a possible was the strategy here and it worked great.
Justin took an early lead and had a great battle with a tall German athlete, in the end the German sprinted harder in the last round and passed Justin by 1-2s BUT his full effort at 4:07min gave him a 6th place finish in the event, only a few seconds behind former Games athletes like Noah Ohlsen, Scott Panchik & Lukas Esslinger.

Another WOD that we tested in training, and then Justin did the entire WOD unbroken in somewhere around 7'40min so the only thing we could really do to improve was to try to go faster in reps & transitions. When we spoke about it the day before the "10 rounds" sounded a lot to go all out in, but when we analysed it further we knew that Justin could.
From his middle lane out of 20 athletes, he had an amazing race with an athlete at the far end who was really fast in the gymnastic but slightly slower on the Kettle Bell. Justin kept on pushing to the max all the way and in the end he over took the other athlete in the last set of snatches and won his heat at 7:13!

One could say that it's frustrating to fall short of a couple of goals such a top 10 finish in total, and what we decided on before Day 3: 2 top 10 finishes in the last 2 WODs - but to be fair those figures are only numbers. 13th or 8th, or whatever, wouldn't change anything in terms of the journey and path we are on.
We don't believe in excuses, but rather see it all as learning experiences to become so good that nothing can stop Justin from winning.
He showed an amazing grit this weekend and knowing that he actually have even more capacity only makes the future even more interesting.

We are still busy building an athlete that can go all the way to the top so every experience right now will only make him stronger and ensure we have all the tools we need in the tool box once it's time to really use them.

We now have Reykjavik CrossFit Championship coming up this weekend where Justin will start by running up a mountain for Event 1!
We headed up that mountain (Mount Esja) yesterday as an "active recovery" piece and to get some mental practice done in preparation for what will arguably be Justin's most stacked competition yet. He will face somewhere around 10 former Games athletes, but he is ready.

The goal is still the same: to gather experience for the future. But I also believe Justin proved a lot this past weekend and can't wait to see him go in and make a mark in this field. With a "new mindset" of not being scared of the all out efforts I think we'll have a really good time watching Justing compete with some of the best in the sport - as I think we should all get used to seeing him in that kind of company! 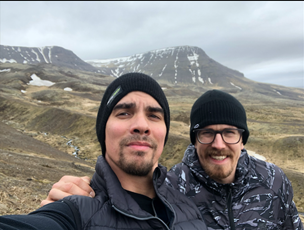 PS. Thank you all for all the support from back home, it lifts Justin more than you can imagine and we are incredible grateful for having such a strong community behind us while we climb mountains - both mental and physical ones.