Without a doubt the strongest field Coach Justin has ever competed in - and he held his own!

The second week of the Euro Trip where Coach Justin competed at two Sanctioned events is over, and as we've had a week to let the impressions settle I thought I'd give you a breakdown of how Justin's second Individual Sanctioned event played out.

Our goals for Justin's were just like in the Italian Showdown the week before simple, but with a super strong field slightly different: Gain experience once again, but also seeing how he would fair in a field with a lot of previous and current Games Athletes in there - if we are aiming to get to that level we must obviously be able to compete with and against this level of athletes in the future!

Compared to the Italian Showdown the field was smaller, but stronger, so we knew that all 30 athletes would be allowed to compete all the way until the 9th and Final event where then the top 10 would be qualified to do the Final WOD.
It had been announced that the first event would be a run up Mount Esja, so we simply headed out there on the Monday before the competition right after landing in Iceland to feel it out and felt quite confident this would be a good event for Justin. Justin stuck to plan to go very easy in the beginning as we were banking on his stamina and conditioning allowing him to pass several athletes on the way up, and it kind of worked out that way..
Justin passed the halfway point somewhere towards the end of the field and he told me afterwards that his calves was burning harder than he expected, but from there on he passed 5-6 athletes by using a technique where he ran passed them and then walked for 20 steps BACKWARDS to give the calves a rest (how clever!) - unfortunately Justin wasn't sure on the distance and felt that he waited a bit too late until he started going hard towards the top and he felt he had more in the tank once done. Justin finished in 33:41min vs Bjorgvin Karl Gudmundson who won with his 27:22min. Apparently he has the unofficial world record up this mountain, go figure haha...

Theoretically maybe Justin would have been able to finish a few spots higher up, but we'll never know so we immediately started focusing on the Snatch event in the afternoon! Going into this event Justin's max was 122kg, but he has barely missed 125 in training on several occasions so we were quite hopeful today would be the day. Justin looked good in the warm up, solid all the way up until 115kg but then I think it's fair to say that he made his only real "mistake" during these competitions - Justin missed 117.5 as he over threw it behind himself and instead of sticking to the plan and wait to the 20s mark (they had 30s to lift) he rushed and tried to do the lift right after which ended up in a rushed attempt and another miss that unfortunately ended up in Justin being knocked out at 115kg.
Now it's not a massive mistake and in the end we can't be too unhappy with a solid 95% of his current 1RM - but we definitely see this as a learning curve and a year from now Justin will be way past 125kg if I'm right as well..

Day 2 was bound to be a BIG day for the athletes with 4 events with only 60-90min between each WOD! We knew some of them but the last one of the day was still unannounced. We also knew that Justin had nothing to lose so our strategy was to attack each WOD as hard as possible (within reason) and see how he would hold up.

We tested this one on the Tuesday at CrossFit Reykjavik as we knew it wouldn't build any fatigue for the weekend and we decided to attack a bit harder than in training with goal splits to be 1:40/500m on Row, 1:45/500m on Ski and then sub 1:40/1000m on the Bike Erg.
Justin did an amazing job here and he beat all his goal times, which lead him to his best finish in the entire weekend with his 10:39min ending up "only" 43s behind the winner Roman Khrennikov who's arguably one of the best athletes in the world when it comes to the cardio machines used in CrossFit. This one was a question of small margins and going all out basically all the way. Justin did great with the Sand Bag and finished 2nd in his heat but the margins fell in the wrong way for us where his 20 reps was good for 19th spot, while ONE more rep would have been a split 12th..
In the Toes To Bar we know Justin feels a bit uncomfortable with big sets like this but due to the short time cap we decided to attack and go for 20-8-7-5-5-5 to get a chance to attack the HSW. It almost held up and even though he broke down to a couple of doubles and triples in the end he was 45s faster than in training! When Justin got to the hand stand walk he showed his world class ability in the movement and passed several athletes, ad if one can wish: with a slightly longer time cap I think he would have placed even higher. If Justin has a mental block against anything in CrossFit I would say it's Legless Rope Climbs. He has had bad experiences in the past (questionable no reps at Regionals & Aphrodite), but more importantly: they have scared him previously.
So we decided on a conservative strategy with 1 rep every 20s in the beginning and then see how long it would last. Justin stuck to plan and was then pushing hard on the Box Overs and Yoke Carries to bring him closer in each round, but in the end he was too far behind and ended up with 1/3 Rope Climbs on the last round - the "worst" performance of the weekend but one that we were ok with as Justin got the most out of himself here. And we only had an hour or so to recover before the 4th and last event of the day - no time to waste! 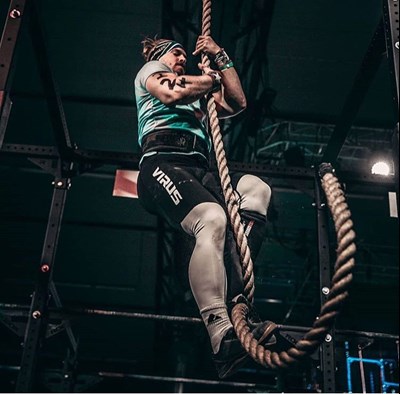 This WOD was released with a big show where Katrin Davidsdottir (FiCT 2019 winner) and Annie Thorisdottir went head to head to showcase their WOD and then the athletes got to warm up before doing the same.
At this point Justin was worried because his grip was absolutely fried and Bar Muscle Ups under fatigue also falls under the "to improve"-box, so I came up with a crazy idea, this was pretty much the conversation:

The deadlifts are arguably the "easiest" out of all these movements but we needed Justin to save his grip as much as possible for the Bar Muscle Ups AND for the Hang Power Cleans which we knew was a big station in this WOD.
Justin followed the plan and was arguably the slowest out of any of the athletes in the entire field on the Deadlifts, but then the plan started to play off when Justin passed most of the athletes in his heat on the Hang Power Cleans and Shoulder to Over Head and in the end we were content with him finishing within top 20 in this type of WOD at this stage. 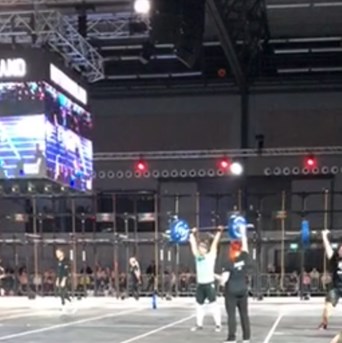 Day 3 was announced to contain 2 WODs plus a Final for the top 10, we knew that was out of range at this point so an all out effort to walk away with full hearts was the game plan!

Cool WOD with good movements for Justin, so all out was the only thing to do. He was arguably the fastest in his heat on the HSPU & Pistols and even though he had some miscommunication issues with his judge he did a great job all the way through and finished 2nd in his heat and with a time we knew was going to be pretty good! 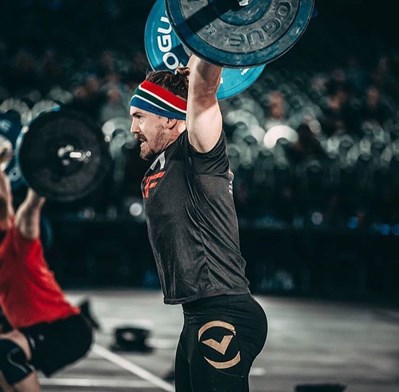 FAST was the first thing we said when this was announced so there's not so much to say here. Justin went all out and kept a really good speed in his heat, in the end his 1:56min time was 20s behind the winner and only 8s behind 10th place so perhaps we can close those gaps with a bit of more speed training! 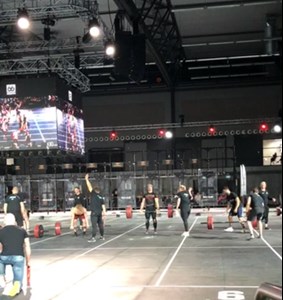 Maybe the 23rd total place was a bit further down than what we were hoping for, BUT the margins at this level are so small that we honestly can't be disappointed. I feel that Justin basically performed at 95% all the weekend through, and as much as one want to ALWAYS perform at 100% it's just not fair to expect that in every competition.
A few reps here and there, or a few seconds here and there could've pushed Justin up to maybe a top 15th place - but that didn't happen this weekend so all we can do is be grateful for the learning experiences and how well Justin really did perform over these 2 weeks.

When the dust was settled I asked Justin how he felt and I'm proud of the athlete he is that can walk away from a competition like this and immediately say:
- "I feel good, next year I'll be back and in that top 10 heat!".

Winning is a process and the road to the top is one filled with hard work and Justin has proven that he isn't afraid of the journey.
We're already planning for next season and Justin is already back in hard training to reach closer to the very top over the next 12-18 months and I back him fully to get there.

These entire 2 weeks were seriously amazing and we had a great time in Italy, but the adventures we experienced in Iceland were insanely cool!
The country is incredibly beautiful and it feels like there are massive waterfalls and glaciers around every corner as one drives on the country side. We were fortunate enough to hook up with Sammy & Asa and their adventure company TRUE ADVENTURE in the beautiful little town of Vik where we Paraglided off a mountain, went to an epic real life Lava Show & then zip lined through a crazy cool canyon over an ice cold river - if you ever do go to Iceland you MUST get there...

We can't thank every one that supported this trip enough but to all of those that got involved buying raffle tickets/t-shirts and especially to all of you that helped us with sponsorships and prizes for the raffle: THANK YOU.
We hope to see you all and thank you in person soon enough, but know that we are humbled and amazed by the support you all give us to live our dreams - for Justin that dream continues into the next season so maybe you'll even join us on the next adventure if the timing and place happens to be right!