CCF Skill Levels Testing is back!

CCF Skill Levels Testing is back!

And this time around we are introducing a new and improved CCF Evolution Skills Charts for 2017!

"CrossFitters at every level are on the same path - moving from functional competence to functional dominance." - Coach Glassman.

We have always been fans of tracking our progress as a community, and as individuals, how else would you know if you are moving in the right direction?
With the new and improved Skill Charts you'll have an even easier way of making sure that all the hard work you put in gives you the results you are looking for.

The NEW version of the CCF Evolution Skill Chart has a few more markers than before, and is now even more connected towards the goals that many of our members might have: to pass the "CCF Big Dawgs Test" and qualify to follow the CCF Performance program. 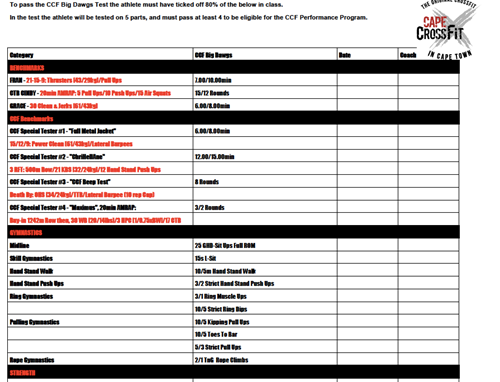 The CCF Evolution Skill Chart has 5 levels, this is the middle one.

In the new version of the Skill Chart you will now find 5 levels that will take you from the our initial recommendations from our CCF Basics Course all the way to what I, as the CCF Head Coach, think you'll need to qualify for a successful Regionals Team in 2018 in the "CCF Wolfpack"-level, or even as an individual in the "CCF Werewolf"-level!

Why is the named WOD's on top of the Skill Charts now?

Well, we realised that to stay true to the fitness pyramid (which we believe highly in), it made most sense to put what we believe is the most important measurable areas first: Your metabolic conditioning performances! 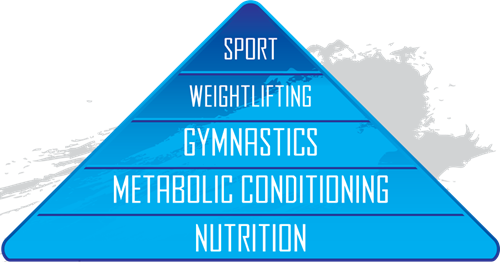 If you have attended our Basics Course recently you know that we focus on this pyramid a lot in our programming and our focus for YOU as a CCF member!

Simply put: it's easy to stare ourselves blind and misunderstand what it is that we need to do to improve as CrossFit Athletes, and become more functional human beings, when being exposed to "I need to be able to Snatch 84kg!"-WOD's in the Open.

What we can not forget is that the above pyramid is what get's us there!

Our programming philosophy, our different programming levels, and our very daily modifications to any WOD is all built on the belief system that if we first and foremost train our Metabolic Conditioning (WOD) with "easy to perform" movement and outside of that continuously practice our Skills such as more advanced gymnastics and Weightlifting - then the results we are looking for will never stop coming. Those 84kg Snatches, Muscle Ups, or whatever it is that your are looking for will come.

And we are kicking off the Test Weeks with "Maximus"! 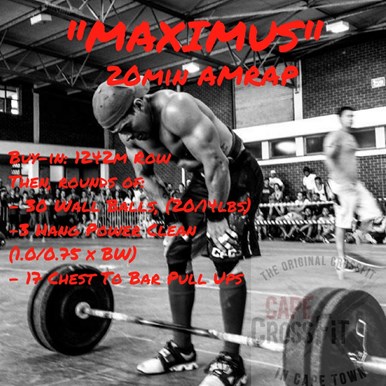 No secret where this WOD is getting it's inspiration from, it's a tribute to our newest and youngest CCF Member, Maximus King Oman.

Maximus has received SO much love and support in his young life already from the entire CCF community, and beyond, so he couldn't be more excited to give back with this great test of overall fitness!

Here's the stats behind the numbers:

Now Maximus is super keen to take on this WOD himself when he gets older, (and weighs enough for us to find a barbell that isn't twice his body weight), but for now he is very keen to see if anyone can finish 5 rounds of the triplet?

There will be many more benchmark WOD's coming your way this week and we hope that you see and approve of our message with them: focus on improving your Fitness first and then we'll be focusing on some more strength and skill development.

However, we will obviously be testing both max lifts, max gymnastic components and much more so start collecting your signatures from your coaches right away as we are presenting you with plenty of chances to get YOUR Skill Chart filled in over the next couple of weeks - this is a great time to see if you have any areas that need more focus, and obviously a time to celebrate how far you have already come!

PS. The Skill Charts will take a few days to find their way to your box so please make sure to take notes in BoxChamp for now and then we'll help you transfer your scores from the first few days of this coming week as soon as they have been printed properly!