First of all thank you to all our members that threw down together yesterday!

Once again the amount of CCF dawgs showing up for the 2nd of these quarterly throwdowns was nothing but incredible. We had around 100 CCF members working hard, laughing, (possibly some crying), cheering each other on and high fiving each other to the max after each one of the 3 gruelling Team Workouts we put them through!

The coolest thing for us was to see the mix of athletes. We had past Regional Athletes in teams with way less experienced ones, teams with members that only been with us for a couple of weeks, and one of our Corporate Clients even sent a team to compete for the very first time - and in the end we were all just having fun celebrating spring and our fitness. 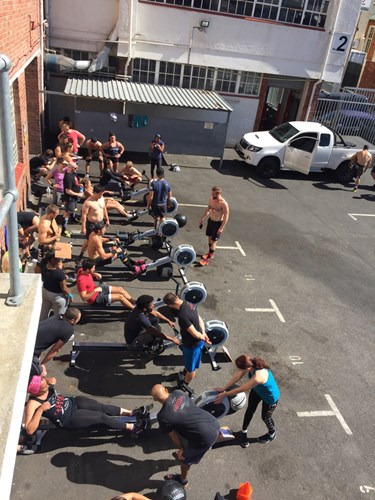 When it come to the scoring we used the same system as last time: top 5 spots in the 50p-events (1A, 1B & 1C) were point giving, and so was the top 6 spots in the two 100p events (2 & 3). We then counted all points achieved by one box together and that then decided which was the "Fittest Cape CrossFit Box in the CCF Spring Throwdown 2017": 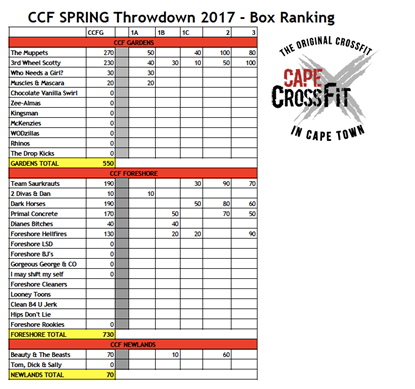 The Foreshore's massive presence (15 teams!) was simply impossible to beat, they had the most point giving teams by far and that was the biggest determining factor!

It was a well deserved victory for our youngest box that showed up in force. Hopefully the 3 penalty burpees before EACH class in Gardens and Newlands will help us grow the competition even bigger from those sides next time around.

In the end I think the coolest thing was that even though there obviously is a lot of bragging rights and glory to be won between the boxes, we also saw a massive support for each other. All teams kept on cheering each other on in the end and my personal favourite moment was the very last heat of the very last event when we all kept on pushing the last team towards the finish line in that gruelling run - that to me stood out as yet another proof of how strong this community really is!

Congrats to "The CCF Muppets" for winning the individual Team Competition.

In the individual team competition we simply ranked all teams after each event and the lowest Total Ranking Points won, just like in the CF Open as an example.

Just like last time we also had a Team competition going on and once again a team from CCF Gardens won it. Kermit (Coach Chris) called the only other athlete at CCF with 5 Regional Competitions under the belt, the Cookiemonster (JP) and together with arguably the strongest lifter we have at CCF right now in Miss Piggy (Lisa) it may be claimed that this team was rigged.. ;)

Gardens took the top two spots in this team competition, but then Foreshore claimed spot 3-8 with their large chunk of competitive teams. We were also quite impressed by the two teams from Newlands that despite being outnumbered held their own and claimed some pretty epic placings in different events!

Lastly, we want to thank you all for supporting a good cause.

We truly are the lucky ones that get to throw down like this on a Saturday and we often take our health and fitness for granted. So, when two of our members (Richie and Schiffy) came to me and suggested we took this Throwdown's fees and donate them to our favourite car guard outside the Gardens box it was an easy decision to make.

Not gonna make it too much about it here, but there's a piece Schiffy wrote about Mario, our friendly car guard, which will be posted by Schiff on the event page for those wanting to read more. Long story short: Mario has been diagnosed with cancer and the money we got as entry fees for the throw down (around R4.000) will be given to Mario to help him in a time of loss of income due to chemo therapy etc which he'll have to go through over the next 3-4 weeks.

This is not us wanting any cred for anything, instead these Throwdowns are amazing fun times where our community comes together to socialise and work hard, and I think we all agree that by also using them to do a tiny small good thing for someone else we are on the right path with the spirit of them.

PS. The Summer Throwdown is planned to be something even cooler than these past two ones, keep your eyes open for more info and a confirmed date later on!