First of all, thank you!

To be honest we never thought that almost 100 of you would plan to spend an entire Saturday morning with us just to do a friendly throw down like this, but you did! 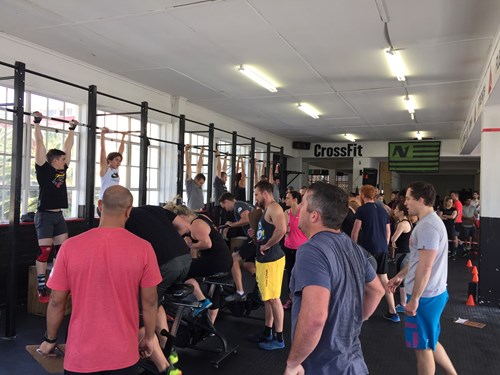 When Coach Chris suggested the idea to the coaching team he said "if we can get more than 10 teams that would be great!" - and we ended up with more than 30 teams taking part in this first Throwdown!!

The purpose of these throw down's is simple: get the CCF Community together and have fun while testing out your fitness. Add some interbox banter, specially made t-shirts, weird movements, and an overall epic support for each other and we think we can easily say that this is what community really means!

Let's cut to the chase: congratulation CCF Gardens for being "the fittest CCF Box in Winter 2017"!

The CCF Gardens teams had a good spread of point making efforts in the different WOD's and that paid off!

The competition was set up as an "unknown and unknowable"-event where non of the WOD's were released until 10-20min before the teams had to do them, which is always a fun way of testing fitness as it forces the athletes to adapt on the fly.

What we could see, and this might be important for the next Throwdown, is that the Gardens box big number of teams seems to be a great way of collecting points as they had a whopping 9(!) point scoring teams vs 6 for Foreshore and 3 for Newlands.

To make it a full on "Inter Box" competition we set it up so that each event had a bunch of points to be fought for. In the first WOD, which actually was 4 workouts in 1, each part was worth up to 150p with 50 for the winner, while Event 2 & 3 had 450p each to be spread out between the top 6 teams in either of them.
If two teams ended up on the same score in a point giving position they simply got the points for their spots split, as an example: Grey Wolves and SwartCliffs both won event 2 and thus got 190p to split between them = 95p each.
While in event 1D we had 4 teams finishing in 5th and they then split the 10p available with 2.5p each.

As usual our mad scientist/Head Coach, Coach Chris, had some curveballs in store for the teams. His explanation to the "unknown format": CrossFit is about being wellroundedly FIT and I like to test your ability to adjust to whatever life throws at you. By only measuring your performance in known variables we actually test how good you are at training for a specific task, not how good you are at performing in real life situations..

On top of this, we obviously wanted to test team communication, strategy, AND make sure that the events were both all inclusive and fun to do for everyone. As fun as it can get to push a sled until you drop.

Movement standard was simple, get your feet above the height of your hands, or knees to armpits for scaled.

Teams were given a cut off climbing rope, two athletes holding one end each while the third one collects skips. 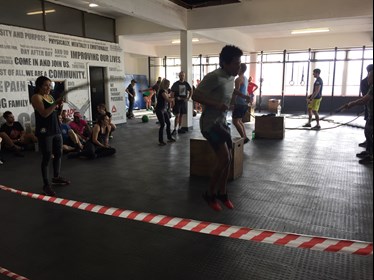 Pick something up from the floor, roll it over your shoulder, good rep!

This was a pure team effort event that brought most athletes to their knees! 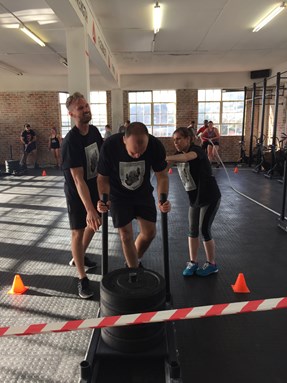 The Fenrirs from Foreshore even came with their own Team Shirts!

Rotate through as you see fit, BUT Barbell can not touch ground or team gets burpees (no teams got burpees!)

This was a classical sprint where the only speed was ALL OUT. The teams that managed to keep the least transitions walked away with the top spots. 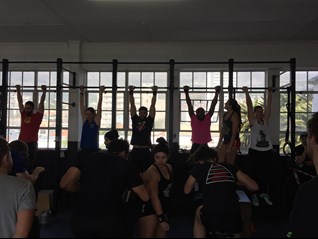 The Fittest Teams of the CCF Winter Throwdown is: The scoring for finding the fittest teams of the CCF Winter Throwdown 2017 worked differently than the Box competition as we here used a regular ranking system where each team got ranked in each of the WOD's, exactly like for example in the CrossFit Games Open.

What we did though was weighing the first WOD's 4 parts at 50% of the value of the second and third WOD (just like in the team competition), so the total ranking points in 1 A, B, C, D simply got added together and then cut in half to give a single ranking point brought together with ranking points for WOD 2 & 3.

At the end of the day it looks like experience matters where our "Masters" team with Tammy, Spargy and Coach Chris took the overall competition with an even effort throughout the events, never finishing worst than 6th in any of the events! 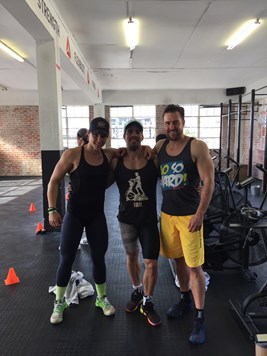 Just like Gandalf the Grey these guys showed that age is nothing but a number..

PS. For the top 3 teams there will be a box of Nutritech Protein Bars to share between you, have your team captain email Coach Chris about what flavour you want and it will be delivered asap!

The feedback we've gotten has been amazing, and just like we do it seems like all you that participated share the "this is really what it's all about"-feeling!
We fought for glory, for fun, and to represent not only our separate boxes but also the greater CCF community, and we can't wait to do it again.

Next time will be the CCF Spring Throwdown which will take place approximate 3 months from now, keep your eyes open for more details in a while.

Oh yes, CCF Foreshore you guys will be starting each class with 3 burpees & CCF Newlands you get 5 burpees per class until the next throw down - always good to start building that fitness now already so you can win the next time! :)