CrossFit is actually quite simple… (Part 2).

CrossFit is actually quite simple… (Part 2).

Ok, so building a base is cool - but what if I want to actually become good at the sport of CrossFit?

Well, without sounding too boring: the honest and boring answer is that you need to build an broader base..

I have had the honour of working with many "high level" athletes over the course of my coaching career, I've met many of the top athletes both in our Region (Africa) and Internationally, and I've pretty much been reading every single piece of material you can find on the illusive "how to train to be a competitive CrossFitter"-subject - and you know what I've found is the common nominator behind ANY competitive athlete in our sport..?

They do the common uncommonly well.

I guess you were all expecting that, but let me break it down for you before you think I'm too obvious and sound like a broken record:

Being competitive in the sport of CrossFit does not only mean being able to Snatch a house and do 37 unbroken Muscle Ups, even though those feats would arguably help. It means even more so to:

Where are you going with this?

Stop looking for excuses as in you not being "strong enough" to get fitter, stop thinking that the fact that you may not have that illusive Muscle Up yet is the reason why you aren't getting fitter. The harsh, but much needed truth, is that you simply need to work harder to get fitter. 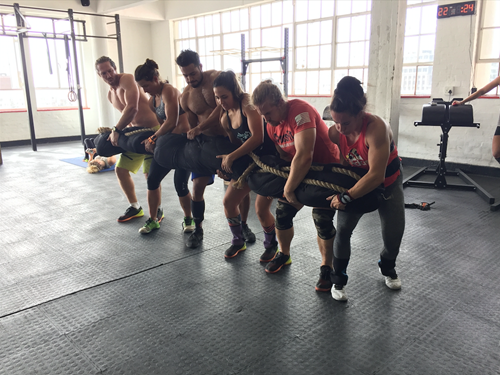 The members of the CCF Wolfpack Team knows that hard work is what gets you to the top.

Now, I hope you don't take all the above the wrong way. I'm really trying to help here. What I mean by all this is that BEFORE we start looking at all the cool things, like 37 unbroken Muscle Ups and Snatching houses, we also have to focus on building that super broad foundation. We need to do the "common" workouts "uncommonly well". We need to be able to move consistently for 20 minutes (at least haha) and we need to be able to do A LOT of pull ups, push ups, light load barbell movements etc etc before we worry too much about our 1RM lifts.

Now here's the funny thing: if you do this your 1RM lifts will still go up! *magic*

What do you mean, would I also get stronger by becoming fitter!?

Don't get me wrong, if you are a power lifter who wants to beat the world record Deadlift (you shouldn't be reading this anyway) you need to lift, lift, and then lift some more. But if you are just like you and me a normal human being that is looking at getting stronger and more conditioned through CrossFit, then CrossFit will actually make you stronger.

We've seen this time and time again, just a couple of weeks ago during our CCF Test Weeks two of our female members PB'd their deadlift when hitting two of the heaviest Deadlifts ever performed by female athletes at Cape CrossFit at 144 and 142kg respectively - and that is after a 4-5 month "cycle" without any extra dedicated strength work where all I've been focusing on is making our members more CrossFit-fit..

The above is only an example of many where we've seen this happen, and I have also experienced the same thing with our competitors. Of course they are lifting heavy often, as in almost every day, but this year I've been focusing on making them more CrossFit-fit (funny word that) than ever before - and weirdly enough they are all hitting PB's in their lifting almost weekly.

Anyway, side tracking a bit as per usual. My point is actually quite straight forward:

If you eventually want to be competitive in the Sport of CrossFit - The number one thing you should prioritise is your WOD.

Make sure that when you enter the Workout Of the Day you are doing so with a set up that will allow you for the highest intensity possible in that specific WOD. This may mean modifying weights and movements to allow for a higher pace (RX does NOT mean "the only way to get fit").

Take the next 3 months of your training and focus solely on going so hard that people start talking about you in the gym as "that guy/girl that always ends up in a corner for 15 minutes after each WOD..". Go so hard that you are having trouble walking down the stairs after a WOD and make sure you take an extra 10-15min recovering before driving home as you wouldn't be able to shift gears otherwise. If you are standing after a WOD, ask yourself the question: did I really go hard enough..?

Do that BEFORE you start thinking that you "need a more competitive program" or "need to do MORE of x, y, z". The proof is in the pudding, the ones that work the hardest gets the best results and the most competitive guys out there in our sport could do a sub 2.30min Fran and +25 rounds of Cindy BEFORE they ended up at the Games you know...

If you are looking for guidance, check out our CCF Skill Levels Charts - they are designed to show you when you are ready for different stages of CrossFit. As an example, before anyone joins our CCF Performance program they have to tick off our entire "Big Dawgs" Level and if anyone is aiming to be in our Team for Regionals 2018 they will have to cover the "Wolfpack" Level (if I'm right which what is required next year, which I usually am..).

Make damn sure that when you walk out of the WOD you do so crawling on all four, leave everything you have out there on the floor every damn day and I can actually guarantee that you will reach those goals you have.

PS. Next week we WILL be looking at what to do to improve the areas that many still think is the only thing that matters: Weightlifting & Gymnastics - but remember, before we jump to the next level in the pyramid we gotta build the base so go and CRUSH your workouts this week and then we'll chat about "the next level" in the next article..

This is an article series which aims at helping you find the right “level” of CrossFit training for YOU.
I’m not here to “tell you what to do”, I don’t pretend that I have all the answers, and I’m definitely not “better than you” in any way..

But, I am quite experienced in the world of CrossFit AND I want you to live your best life - two aspects that I hope will mean that you can find a lot of powerful guidance in these small articles.