The Competition Season is upon us!

We are super excited about the news that our* "baby" FiCT is now a "Sanctioned Event"!

*Did you know that the founder of Cape CrossFit, Coach Jobst, started FiCT back in 2011?

This means that CrossFit Fittest in Cape Town is now going to be one out of only max 16 CrossFit competitions world wide where individuals and teams can qualify for the CrossFit Games, and as such we think there will be plenty of international super star CrossFit athletes coming to Cape Town to try to win those highly sought after tickets.

What's even cooler than that is that now YOU can measure your capabilities against those already now in November when the CrossFit Fittest in Cape Town Online Qualifiers kick off!

How will the Online Qualifiers work in General?

You can read all the details on the webpage, but in short here's what you need to know:

So how can I qualify as a CCF athlete?

The way the Team Division Qualification has been put together is pretty cool, and very similar to the CrossFit Games Open. There are 3 ways of qualifying for the competition:

Top 20 Female & 20 Male will be invited to compete in the Individual Division.

What it means however is that EVERYONE should sign up individually and then chose their home box first according to where they train the most, chose one out of the 3 CCF boxes:

We will then run the Qualifier Sessions below* with the obvious goal to qualify teams from all 3 boxes. Whoever ends up in the highest ranking spots will get a chance to represent their CCF box, and IF any box happen to qualify a team within the top 50's first wave we'll obviously hope that a second team can have a high enough ranking to also qualify - plenty of opportunities!

We want to use these exciting times to put together some epic qualification session, similar to the Open so please see the planned times below:

Who can judge my WODs? ONLY fellow athletes that have a CrossFit Level 1 credential and/or the CrossFit Online Judges Course.
There is also a video requirement for ANYONE aiming to qualify, individual or team, (Individuals MUST present a video with each score, Team Athletes will be asked after Qualifiers to present at least one unknown video) - this means that everyone must video their videos if they want to stand a chance to represent a CCF team. We highly recommend the Official Timer Partner for FiCT: WODProof App

Can I do the Q-WODs in a class? ONLY if you are NOT planning on being in a team. We will run the Q-WOD's on the 3 dates above in class so all CCF members will be doing them. But if you want to stand a chance to be in a team you will need to video record your WOD's according to the above which wont be available in the classes. And if you have signed up for the Leaderboard you will still need to have someone that fulfil the judging requirements (you can then grab a friend and for instance do the Online Judges courses together and rock up to any class).

Should I sign up even if I don't think I can qualify for the Box's Team..?
YES! Partially because you will have so much fun competing on the leaderboard against some of the best athletes in SA, and the world. But also because you then get to be part of the BIG Team in YOUR box!
There are even a competition where the box with the biggest team roster in the Online Qualifiers wins a FREE entry to the Main Event (if they qualify), so you can help your team no matter where your capacity is right now.

Sign up today and join in on the fun! 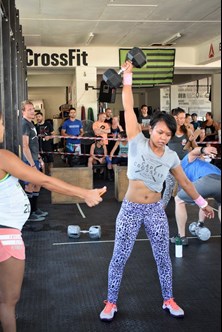 The Open is usually one of the most electric times of the year in the box, and now we get to experience it already in November with the CrossFit Fittest in Cape Town Qualifiers!

We have a proud history of high placings at FiCT with several wins and podium finishes on both the Individual and Team side over the years. Last year we had Coach Alan winning the Individual division, and so did our team the CCF Wolfpack!

No matter if your goal is to qualify for the CrossFit Fittest in Cape Town Main Event or plan to do the Qualifiers just "for fun" we hope that you are as excited about us in tackling these WOD's as a community - we're all on the same team here and either it will hopefully be you, or someone else that get to represent YOUR box on the highest level of competition that South Africa, well actually Africa, has to offer!

PS. Ask your coaches any questions you might have around this!