Follow the CCF Wolfpack at Regionals in Madrid, Spain!

Follow the CCF Wolfpack at Regionals in Madrid, Spain!

Tomorrow, Friday the 1st of June, our Cape CrossFit Wolfpack athletes are finally entering the Caja Magica Arena in Madrid as the home of Rafael Nadal gets turned into the vibrant fire pit of an arena for the CrossFit Games Meridian Regionals 2018!

Our athletes are better prepared than ever and we look forward to seeing them competing against the best in Africa, Middle East & Europe South. The competition is strong, but so are our athletes and we hope you'll be tuning in to watch them live - We'll be LIVE STREAMING it from the box every day during our opening ours, and otherwise you can find the stream here: www.games.crossfit.com

Follow THIS LINK for the WOD & HEAT Times, we only know the exact heat times for our athletes later today and before each day, but check out our Instagram account (@capecrossfit & @capecrossfitwolfpack) as we'll be posting the times there as soon as we have them.
We hope to see them towards the later heats as that would mean they are fighting in the top! 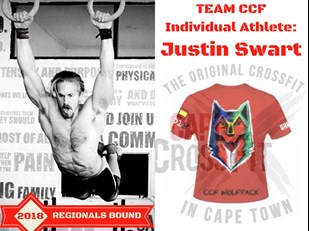 First out our very own Coach Justin - "homegrown" through our ranks since 2014!

Age: 27
Years of CrossFit: 5
History: 3 Regionals on Team CCF, 1st in a Team at Fittest in Cape Town 2017, 5th Individual FiCT 2018.
Open Rank Africa/Middle East: 11th.
Favorite thing about CrossFit: The opportunities for self improvement are endless!
Goals for Regionals: Top 10 Finish.
One thing people don't know about you: Addicted to Rocket League!

This is Justin's first individual Regionals competition, but seeing how much he climbed the Open Leaderboard from 2017 we know that he will show that he belongs with the top athletes in our sport, especially watch out for Justin in Triple 3 and the Gymnastic bonanza in WOD 3! 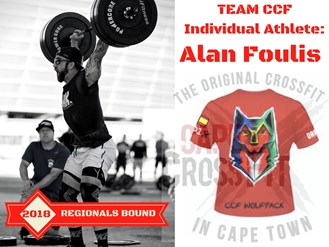 Next up Coach Alan!
Age: 32
Years of CrossFit: 5
History: 10th Africa Regionals 2013, 28th Meridian Regional 2016, Winner Fittest in Cape Town 2018.
Open Rank Africa/Middle East: 4th.
Favorite thing about CrossFit: No matter who you are, lying on the floor after a workout reminds you of how good it is to push yourself!
Goals for Regionals: To qualify for the @crossfitgames.
One thing people don't know about you: I have a Masters in Marine Biology (edit: wtf?) and have never played candy crush..

Alan have only been with us for just under a year, but what a year it has been..
After winning FiCT 2018 and placing 4th in a stacked Africa Middle East Open group Big Al is looking to fight for the very top spots for sure, Alan is well rounded but he definitely loves a heavy barbell so especially keep your eyes open during the Snatch Event (#4) and the Final Thruster one (#6) as we expect to see some fire work from him then! 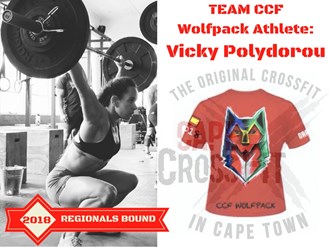 Our Team Athletes, First up Vicks!
---
Age: 26
Years of crossfit: 4 Years
History: Individual 2014 African Regionals, Team CCF Wolfpack at Meridian Regional 2015-2017, 3rd Individual FiCT 2017.
Favorite thing about CrossFit: The community it creates.
Goals for Regionals: Top 8 or even fight for a spot to the Games.
One thing people don't know about you: I speak 4 languages!

Vicky have competed at every Regional Competition since she started CrossFit 4 years ago, and have represented the CCF Wolfpack in 3 straight Meridian Regionals. She has one of the biggest engines out there and when it comes to bar gymnastics few can match her capacity - Btw, did you know that Vicks actually was the one that coined the #proudlycapecrossfit? 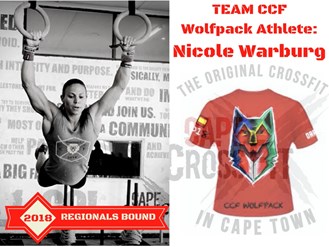 Nicole is a newer addition to Team CCF as she only joined us in September last year
---
Age: 34
Years of crossfit: 5 Years
History: 2nd Individual 2014 African Regionals, FiCT Winner with Team CCF Wolfpack 2018.
Favorite thing about CrossFit: The daily challenges and having to face your fears.
Goals for Regionals: Qualify for the @crossfitgames
One thing people don't know about you: All I wanted to be growing up was a Gladiator! I used to watch Gladiators every Friday night with my parents.

Nicole and Vicky are fairly similar as athletes and Nicoles gymnastic is super impressive on all levels, the two girls are paired up in many events and it will be epic to watch these tiny but mighty athletes create some ripples on the arena floor together! 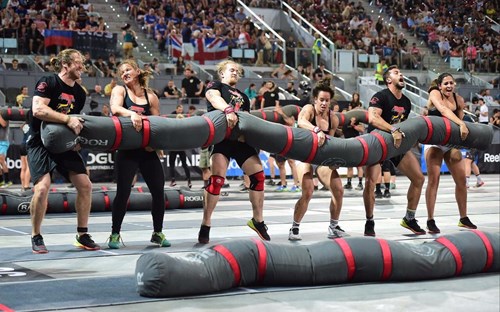 Matt & Richard are both experienced Team CCF athletes as Matt is entering his 3rd CCF Wolfpack appearance at Regionals and Richie his second. They are both super well rounded beasts and even though Matty hates Burpees we wouldn't be able to say who can hold on to the bar the longest in a max CTB race..?
Keep your eyes out for the boys in the CTB Run WOD and also check out their HSW walking skills in that event, actually: just watch the boys slay it this weekend!

Overall we are stoked to say that we aren't only sending the strongest group of athletes we've ever sent from CCF, but also that all these athletes individually are better than they have ever been before.
We are looking forward to seeing them crush this weekend, as we know that this is only the beginning of their future dominance in the sport!

PS. If you want to throw down and test out a couple of the Regionals Team WOD's put on your CCF Wolfpack Supporter Shirts and join Coach Nel & Coach Kelly on Saturday between 9-12 as we attack those in between our athletes heats - obviously while the TV's are running hot with regionals coverage!