Join Team CCF in the Open, win some CCF swag, glory & do some good while you're at it!

Join Team CCF in the Open, win some CCF swag, glory & do some good while you're at it!

This year the Open will be slightly different - Join our CCF Open Super Saturdays!

Friday Night Lights has been serving us well but for this year we are, based on feedback from our members, focusing on getting our big CCF Community together on Saturday mornings instead. The idea is that instead of "having" to put off a full Friday night you can now start the weekend off with a great morning session where you get to compete against the rest of the world - and WITH your CCF team!

What is the Open!? If you haven't done the Open before, the above infographic explains it well, but in essence it is: A great chance to get to compete at YOUR level over the course of 5 weeks. A great chance to test your fitness against, but mainly with, those around you at the box. A great chance to experience the true centre piece of training at CCF - The Community!

Why should I do the Open?

CrossFit is honestly much more than just a "competition", it's a life changing and life improving method of training. The Open however is a great time to throw yourself into the ring. By putting yourself in a competitive, yet supportive, environment you will rise to the occasion. We've seen year after year again how all our members outperform themselves in this setting and can't even begin to list the countless number of PB's, first gymnastic feats such as pull ups, hand stand push ups, muscle ups, etc, etc that we've seen over the 8 years of the Open at CCF!

We see these 5 weeks as being some of the best community building ones in boxes around the world year after year. And at CCF it's a pretty rad thing to see everyone taking part supporting each other as Team CCF!

And on top top of that, this year we are also offering you a chance to do some good while you are testing your fitness:

Compared to previous years there will be no "team competition" in the Open, (the only way to qualify for the CrossFit Games as a team is through the Sanctioned Events, such as FiCT). Instead we have decided to turn the Open into our own in-house Team Competition.

Basically it will be based on a weekly, 4-athlete, team competition where the winners will win not only the bragging rights as the "fittest CCF team" - but they'll also get some cool CCF merchandise and maybe most importantly: they get to choose a charity that we'll donate the prize pool to!

In the end after 5 weeks we'll simply take your athletes ranking IN THEIR AGE division and put it together in to a Total Team Score - lowest total team score = winners!

We'll charge each team R100 to enter the CCF Community & Charity Open, but then WE will add an additional R100 to this give away prize pool. As an example if 10 teams enter there will be R1,000 in the pool from entry fees and CCF will then add R1,000 so that the winning team chooses a charity to give the total R2,000 to. 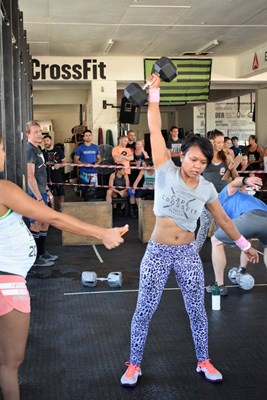 The Open is for EVERYONE, Zee is probably doing her 3rd or 4th Open with us at CCF in 2019 - but maybe you'll join us for your first one..?

The winning Team will also be kitted in some cool CCF Swag? 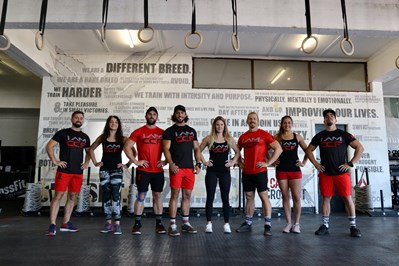 By winning the CCF Community & Charity Cup your team wont only win the bragging rights and the choice of where the money goes to, but you'l also win a cool kit from us at CCF:

Who can be in my team?

Each week a different CCF box will host the entire CCF Community, except the 4th week where we'll have it as an Open Throwdown in each box. The CCF Barbell Club will move to 11.00 in THAT box for these 5 weeks while CCF Gardens still has it's Open Gym between 10.00-13.00 EVERY Saturday.

NB: ALL CCF members can join the Super Saturdays during this period no matter what membership version they are on (as long as it's within their allocation of weekly sessions)!

What if I can't do the Open on the Saturdays? 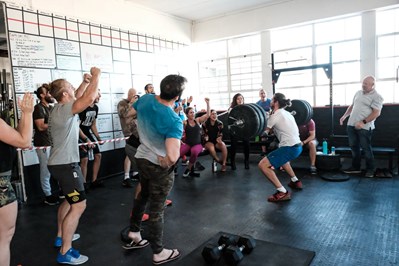 You can still do the workouts on either a Friday, in the Open Gym on a Saturday/Sunday, or at night on a Monday. We'll put aside SOME space for you but please note:

PS. Who should "redo" an Open WOD? 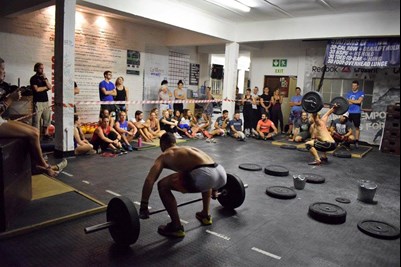 Ah, the annual question of the year.. The honest answer is: ALMOST NO ONE!
This year the Open will ONLY allow the top 20 in the WORLD and the Fittest athlete in each country to qualify for the CrossFit Games 2019 - so unless that is you, why would you need to redo a WOD?

Here's Coach Chris' reasons NOT to redo (unless you're aiming to go to the Games):

So WHO should redo?

ONLY, athletes that have a proper chance of qualifying for the CrossFit Games OR that are aiming at competing at Sanctioned Event Qualifiers in the remainder of 2019 - that leaves us with about 5-10 total athletes at CCF.

The rest of us should use the open to have FUN, measure our fitness against the rest of the world, and then continue to improving our daily lives with the constantly varied CCF program that always allows us to become better human beings!