Sign up for the CrossFit Games Open 2018 - be part of one of the biggest teams in Africa!

Sign up for the CrossFit Games Open 2018 - be part of one of the biggest teams in Africa! In 2018 we are aiming to have the BIGGEST TEAM in Africa - be part of it by registering NOW!

We are super excited to once again line up for 5 epic Friday Night Lights sessions where our entire community comes together to throw down in whatever madness Dave Castro throws at us!

Just like the previous years we will run heats from 16.00 onwards and with the bigger equipment and pull up bars all over CCF HQ - Gardens we expect to be able to run some pretty electric BIG heats.

If you can't make a Friday afternoon you still have a few choices:

What is the Open? 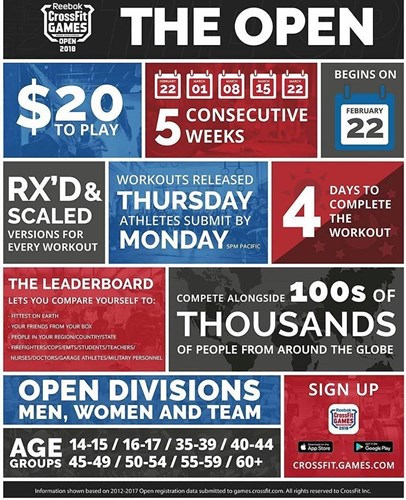 5 Weeks of WOD's designed to find the fittest human beings in the world, but also a great test for ANYONE to see how far they have come in their training.

In 2017 +300.000 all across signed up the world. The top 20 in each Region moves on to the Regionals, but to be honest that's not what it's about for most of us. For most people the Open is the test in it self and it gives us 5 weeks of throwing down as hard as we can against, but most importantly, WITH our friends in the box!

Each year Team CCF is one of the biggest team groups in SA and this year we are aiming for the title as the very biggest gym in all of Africa - this means that we need YOU.
Sign up here and your coaches and team mates will push you hard for 5 weeks, but also always be there to give you a high five after each WOD is done: https://games.crossfit.com/

Who is the Open for?

Everyone, seriously. The cool thing about the Open is that all fitness levels are accommodated. Sure, the top athletes will perform at an insanely high levels versus a beginner - BUT, you are competing against yourself to see if you can improve your ranking each year. AND, there's even a Scaled Division!

How do I prepare for the Open?

Well to be honest all you can do now is enjoy the journey as the workouts are unknown, and as such they are great tests of your fitness. Being prepared for the unknown is always a good philosophy, and we believe that your training in our CCF Classes will have prepared you for exactly that - we always train with the well rounded fitness as our main goal and that is exactly what shows up in the Open.

Pull ups, Barbells, Dumbells, Rowing, Double Unders, etc etc are all stuff that shows up in the Open year after year - so if you've been with us at CCF for at least a couple of months you are well prepared to have FUN in the Open!

How many times should I do each Open WOD..?

We get this question every year, and every year many athletes "know they could do better if they just tried again" and as much as that is possibly true our rules are SIMPLE - No redo unless you are:

This is simply for your benefit as an athlete, because if you think that doing the same WOD twice in 3 days is better than working on your well rounded CrossFit-capacity in class you probably wont be very much better when the Open comes back in 2019 - and on top of that we know the serious injury risks involved with doing the same thing twice in a short period. Constantly Varied is one of our 3 main principles for a reason...

Do the Open WOD on the Friday and practice a "one shot kill"-mentality, come in and work on some weaknesses or have fun in the Barbell Club on the Saturday and then get even fitter with the Class WOD on the Monday - sounds like a good plan to us!

To have some more fun, and to do some good during these 5 weeks we are also setting up, 2 fun "Categories" of competition based on our super popular "Throwdowns"-structure and then a fun way to challenge a friend!

Example of scoring: In week one Leandro ends up 71st in SA (Men's Division), Kelly ends up 52nd (Women's Division) and Manny ends up 3rd (his age group Master's Division) - their TOTAL SCORE for Week 1 is then 126p (71+52+3) and that gets ranked against all other entered "mini teams".

Choose ONE of these punishments that the losing partner will be doing each week after each Open WOD:

The CCF Grudge Match is a concept that Coach Chris & Japes have a standing bet for in EVERY daily WOD and it makes them both push harder in each session. We recommend you and your partner to chose the one you would like to do the least.

CCF Wolfpack - One Team, One Dream. 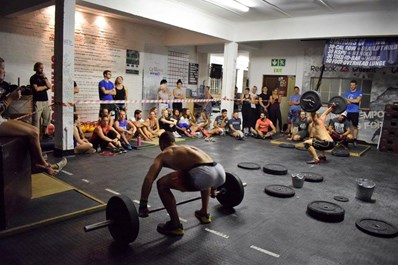 Richie & Coach Justin throwing down in 17.3 - both boys eventually competed with the CCF Wolfpack in Madrid!

Did you know that CCF is the only box in South Africa that have qualified a team for the different Regionals competitions since 2011? That's 7 years and counting, and this year our big competition team is looking stronger than ever!

Coming of a fresh win for the CCF Wolfpack at Fittest in Cape Town and with Coach Alan winning and Coach Justin finishing 5th in the same competition in arguably the strongest individual field we've seen on SA ground, possibly ever, we have big goals for our most competitive athletes this year.

And at the same time, one of the coolest things with the Open is that we are ALL in the same team! All our CCF members at CCF HQ will be in the same team and as such anyone can actually contribute to the teams success - but more importantly we will work as a BIG team throughout these 5 weeks and as such we know we can not fail.

So what do I do now?

Go SIGN UP FOR THE OPEN HERE! Then pick your team mates for the "Mini Throwdown" and challenge your friend in the "Grudge Match", show up for class regularly and book off the next 5 Friday nights as those will be parties you don't want to miss - we'll take care of the rest!