Support the CCF Wolfpack - we are sending our arguably strongest group of athletes ever to Regionals 2018!

Support the CCF Wolfpack - we are sending our arguably strongest group of athletes ever to Regionals 2018!

If you would have asked us before this season started what our goals were for the season we couldn't even have dreamed of our entire Team CCF performing as well as they did this year in the Open..
Don't get us wrong, we knew that the athletes had put in a lot of hard work and was better prepared than ever. But, to also have pretty much the entire CCF Competition crew perform at the top of their ability over 5 weeks is nothing short of amazing!

When the dust have finally settled we ended up with our most top 100 rankings since this version of the Open started with the following athletes ending up in the top 100 in the Africa - Middle East Region:

Now the cool thing is not only how well these athletes performed and how much it speaks of our broad base of competitive athletes at CCF now, but if you look at their CLIMBS this year it makes it even more impressive.

We'd like to ask for your help to get the team to Madrid..

Just like previous years we hope to gather as much support as possible for our strong group of athletes to give them a chance to perform at the very top of their abilities when it's time to enter the arena floor in Caja Magica, in Madrid in June!

We have set up a few different variations to be able to support the team and hope that some of them will be interesting for you, or that you at least want to come and hang out with the athletes on our BIG Fun(d)raiser!

This is a great way to support the athletes, but also make them fitter (read suffer a bit more)..

You simply donate cash through the GoFund and the entire team get to "pay it back" with 1 Calorie on either the Assault Runner or Assault Air Bike from MiFitness for every R10 donated.
Last year that would have cost them about 3000 calories so this can become interesting to watch as we'll live stream the entire calorie hunt on our Instagram page - and yours truly Head Coach have promised to help out as well... 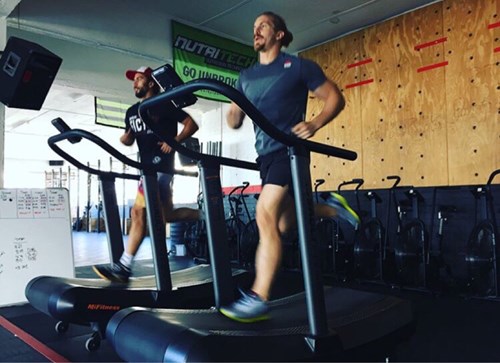 MiFitness have supported our athletes in a big way this year by providing them with these epic Assault Runners!

This is usually a highlight of the competitive season for many of us since it brings the entire CCF Community togheter, we often also get very nice support from other boxes and it's always fun to throw down for fun in these BIG team WOD's.

What we do is divide EVERYONE that comes to support in to big teams where each Regional Athlete "captains" one team each to fight for glory while any proceeds of the event also goes to the team!

There will be a few ways of supporting the athletes on this day:

*This year we will have our BIGGEST RAFFLE yet where some of the biggest prizes will be:

#3: Donate a cool prize to the Raffle!

Just like previous years we are super appreciative of any prizes donated to the Raffle as that only raises the value of the entire event and as such helps us sell more tickets. Contact [email protected] if you have something in mind that you think will suit the raffle!

No matter how much financial support we can raise for the athletes or not we are super grateful for all the positive support we have received from both inside and outside the CCF Community - we are proud to have so many people cheering our athletes on from everywhere in the world.

Keep your eyes open for more information about the Fun(d)raiser and the awesome prizes as we'll announce them during the next couple of weeks - hope to see you there!